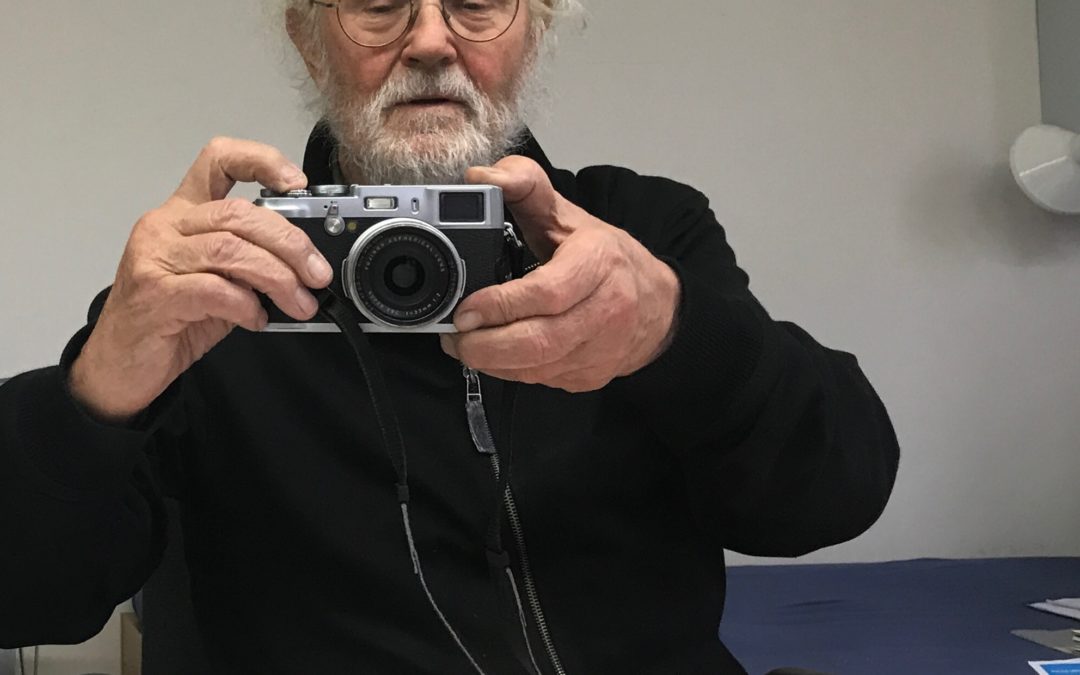 “Mr Koudelka, I appreciate immensely the fact that you have decided to donate your world-famous photographs to the Czech Republic. I consider it an obligation not only to preserve your work with sensitive care, but also to find a worthy and fitting way to present celebrated Czech photographers like yourself, Sudek, and Drtikol at home and abroad.”

Few artists who have spent most of their lives abroad have done so much for the Czech Republic, for the presentation of Czech culture by means of pictures and topics that touch each of us. Josef Koudelka is one of the most important humanist photographers in the world, and although human beings have gradually vanished from his photographs, his profound interest in humankind is still present in them.

The donation to the Museum of Decorative Arts in Prague

Years ago, Josef Koudelka decided to donate to his native land a large set of photographs, which would represent his life’s work. “I think that the best of what I have ever done in my life should remain in the country where I was born.”

In all, he is donating to his native country about two thousand photographs, the most substantial part of which (1,800 items) is going to the Photography Collection of the Museum of Decorative Arts in Prague (Uměleckoprůmyslové museum v Praze – UPM). The first part of the Donation was completed in 2018, when the UPM mounted the large retrospective entitled Koudelka: Returning in its newly renovated and remodelled main building. The exhibition was held to mark the photographer’s eightieth birthday and encompassed the essential works from his career. The exhibition was accompanied by a comprehensive publication of the same name. Published in Czech and in English editions, it includes considerable documentation and articles written especially for it by Stuart Alexander, Josef Chuchma, Jan Mlčoch, Josef Moucha, Tomáš Pospěch and Irena Šorfová, together with an essay by Anna Fárová written in 1967.

The donation agreement for the second part of the gift to the UPM was signed this year and another part is currently being prepared. “I am glad about the care that the Museum of Decorative Arts has so far given to my donation and I believe that my work will be in good hands here.”

The large donation to the UPM comprises not only the retrospective, with the various series entitled Beginnings, Experiments, Theatre, Gypsies, Invasion, Exiles, and Panoramas, as well as the sets of the panoramic photographs from the DATAR project, The Black Triangle, Chaos, Traces, Industries, Camarque, Teatro del Tempo, Lime Stone and others, but also, among other things, the yet unpublished set of photographs of home-made posters by Czechoslovak citizens, which Koudelka took in the streets of Prague during the Soviet-led invasion in August 1968.

“It is for me and the Museum, with its tradition going back to 1885, a true honour and source of satisfaction that it can henceforth look after the life’s work of Josef Koudelka and, thanks to its collaboration with his foundation, it can help to spread his legacy not only at home but all over the world!” says Helena Koenigsmarková, the Director of the Museum.

The negotiations concerning the size of the donation, which had taken place since 2007, were mainly about the terms and conditions of the gift, which included the manner of storing the works, the possibility of checking the conditions of their storage, copyright, loans to other museums, the specifications of licensing the use of the donated prints and limiting their use, for example, in commercial items, and, last but not least, making the collections accessible for research. In the meantime, the UPM built a new repository (completed in 2016), where the donated works are currently housed. This has made possible the creation of a suitable environment for the storage and care not only of the photography collection, but also of all the other materials at international conservation standards. The work does not, however, end with the signing of the donation agreement: for example, the donation still needs to be catalogued, a list of the items comprising it must be drawn up, as must the documentation, and guidelines for international touring exhibitions of the works.

In December 2019 Tomáš Pospěch was appointed Curator in the photography department. He is in charge of looking after the Koudelka collection and the cataloguing, conservation and research of the donation at the UPM.

The Josef Koudelka donation is uniquely important. Together with the extensive collection of photographs by František Drtikol and Josef Sudek, which were also donated to the UPM in the past, the Josef Koudelka collection will be among the most important collections of internationally renowned photography in a Czech institution.

Both rare and unique vintage and early photographs make up the core of the collection donated to the Museum of Decorative Arts in Prague. Among the other leading institutions holding his works are the Centre Pompidou (Paris), the Maison de la Photographie (Paris), the Bibliothèque nationale de France (Paris), the Museum of Modern Art (New York), the Art Institute of Chicago, the J. Paul Getty Museum (Los Angeles) and the Victoria and Albert Museum (London).

Donations to other institutions

Apart from the donation to the UPM, Josef Koudelka decided to give a complete collection of works from the Invasion 68 exhibition which toured to many different international venues since 2008, to the National Museum in Prague. They are photos from the book of the same name, published in twelve different language editions in 2008 to mark the fortieth anniversary of the Warsaw Pact invasion of Czechoslovakia. “I am very glad that the National Museum keenly welcomed this set into its collections, because the photographs will be presented here in another context, that is, a historical one, and, moreover, many of them show what was then happening below the windows of the National Museum and elsewhere on Wenceslas Square,” says Josef Koudelka.

Koudelka, who comes from Moravia, has also chosen more than a hundred photographs, which he offered, at the request of the curator of photography Antonín Dufek, to the Moravian Gallery in Brno. This institution, which since the 1960s has built up an important collection of Czech photography, is being given a selection from three series – The Black Triangle, Invasion 68 and Gypsies (many of which were made in Moravia).

“The unusually generous way in which the world-renowned photographer Josef Koudelka has decided to donate his photographs for the benefit of Czech institutions, including the Moravian Gallery, deserves exceptional recognition. At a time when it is very difficult to get funding for acquisitions, the donation of key photographs by Josef Koudelka means a fundamental enrichment of how his work is represented in our collection,” says Jan Press, the Director of the Moravian Gallery in Brno.

Josef Koudelka also offered an important set of photographs to the National Gallery in Prague. It comprises eighteen large-format photographs, titled De-creazione, originally printed and exhibited within the Pavilion of the Holy See at the Venice Biennale in 2013.

The non-profit Josef Koudelka Foundation was established in 2019 to protect the integrity of his life’s-work and collaborate with international art institutions in placing major groups of his photographs in their collections. Koudelka is the Founder and Chairman of the Supervisory Board, which consists of his friends and trusted collaborators of many years: Irena Šorfová, Jonathan Roquemore and Stuart Alexander, and his legal representative, František Vyskočil.

“I am putting my affairs in order. I established the Foundation to protect my work, to keep it undivided. I approached people whom I have known for years; friends with whom I have worked for a long time will now be responsible for the protection of my work, in the true sense of the word protection. They have my complete confidence. I do not want anyone after my death to do whatever he or she wants to do with my work. I do not want my work to be distorted or misrepresented in any way. I edited my work meticulously over many years. The Foundation knows my wishes and views, and in that spirit it will look after everything, including the completion of all the documentation. I hope that I manage to finish all the important things I would still like to do, but if not, I know that thanks to the Foundation everything will be well looked after.”

JOSEF KOUDELKA was born in Boskovice, Moravia, in 1938. Originally an aeronautical engineer, he began to devote himself to photography in 1958. At that time, he photographed the productions of several Prague theatres and the life of the Roma in Moravia and Slovakia. In 1968 in Prague, he documented the Warsaw Pact invasion of Czechoslovakia. The following year, to mark the anniversary of the invasion, several of these photographs were published in many foreign periodicals, and were attributed to “P.P.” (that is, Prague Photographer), without Koudelka knowing about it first. The Overseas Press Club of America awarded the Robert Capa Gold Medal to the “anonymous Czech photographer” of these works. Today they are widely considered classic examples of post-war photojournalism. (To mark the fortieth anniversary of the invasion, Koudelka published a book in 2008, which contains 249 photographs, with accompanying articles and other texts by historians. The book was published in twelve different language editions.) Fearing possible reprisals, Koudelka decided to leave his native country in 1970. He left for Great Britain, where he was granted political asylum. In 1974 he became a member of the Magnum Photos agency. Later, he left for France, and in 1987 was granted French citizenship. In collaboration with Robert Delpire, he published the book Gitans: La fin du voyage (1975). This was followed, in 1988, by the book Exiles. Since that time, Koudelka has published fifteen books documenting human influence on the land. In 2019 he established the Josef Koudelka Foundation, of which he is Founder and Chairman of the Supervisory Board. www.josefkoudelka.org

This site uses Akismet to reduce spam. Learn how your comment data is processed.